what do we need to know 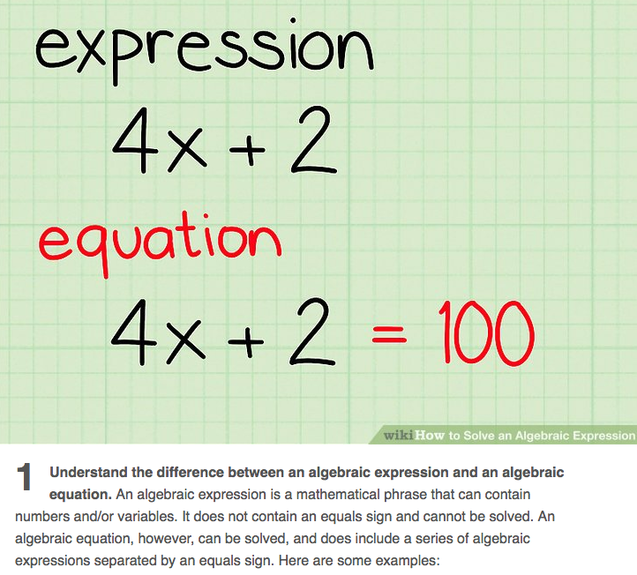 what is an algebraic expression?

An ALGEBRAIC EXPRESSION is a mathematical phrase that can contain numbers, variables (letters) and operation signs (add, subtract, multiplication, division ).

parts of an algebraic expression

- A VARIABLE is a letter that represents one or more numbers.  This means that the variable changes, or varies!  On the first example, the variable is n., whereas on the second example the variable is x..  Be aware that variables are written in italics so they are not confused with units of measurement.

-  The CONSTANT term in algebraic expressions is the term that consists only of a number.  This means that the constant is not attached to any variable, and therefore, it never changes.... the reason it's called the constant!  On the first example, the constant is 2, and on the second example it is the -3.

- The COEFFICIENTS are all the numbers placed before the variables.  They are related by multiplication, even if you don't directly see the multiplication sign. In the first example, the coefficient is 7, and on the second example it is 5.

you will see these special cases... so let's make sure we understand!

When in doubt, remember the RULE OF THUMB: Every expression MUST HAVE A CONSTANT, and every constant MUST HAVE A COEFFICIENT... even if you don't see them..  Look at this first example: 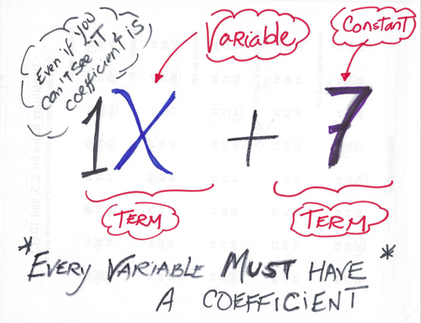 So if YOU DON'T SEE A COEFFICIENT IN FRONT OF A VARIABLE., it is still there (but hides).  THE COEFFICIENT IS ALWAYS A 1

Let's look at the other special case.  Remember, expressions must have coefficients and a constant. 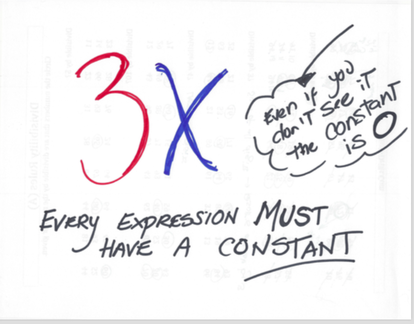 Notice how this expression has only 1 term, and it doesn't have a constant.  But it does! When you see an expression without a noticeable constant, it means THE CONSTANT IS 0.

To EVALUATE an algebraic expression, you have to SUBSTITUTE the given NUMBER for ALL VARIABLES.  Once you substitute, you must perform the arithmetic operations following THE ORDER OF OPERATIONS (BEDMAS).