what do we need to know

- Difference between algebraic expressions and equations
- Zero pairs: made up of integers of opposite sides but same value.
- To solve an equation means to find the value of the variable.
- Throughout the lesson, you will learn how to use algebra tiles to solve equations,  I will be guiding you all the way through.

Here is an example of how an equation is solved.  Keep in mind, though,, that you will learn how to do this later on,, and that we will focus on learning how to do this using ALGEBRA TILES: 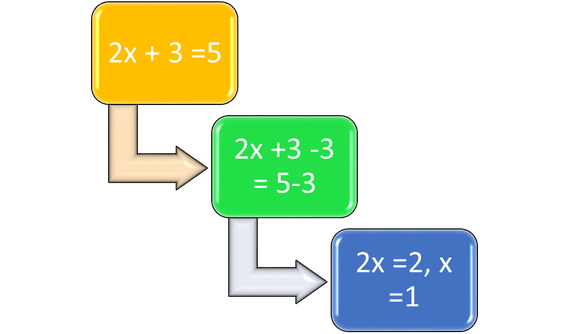 Algebra tiles are "manipulatives" that we can use to solve equations. Each shape and colour mean something, but don't worry, it's not hard to remember:

To help us solve equations, we need to understand the concept of a ZERO PAIR.  Take a look:

These are called ZERO PAIRS because their sum (addition) is equal to zero.  The first example is +1 and -1, which is equal to 0.  The second example is +X and a -X, which also make 0.  Think about it this way: because they have the same value but opposite signs, they cancel each other out!

Before we solve equations using algebra tiles, we need to able to "write" or represent them using the tiles.  Look at these examples:
Let's practice: 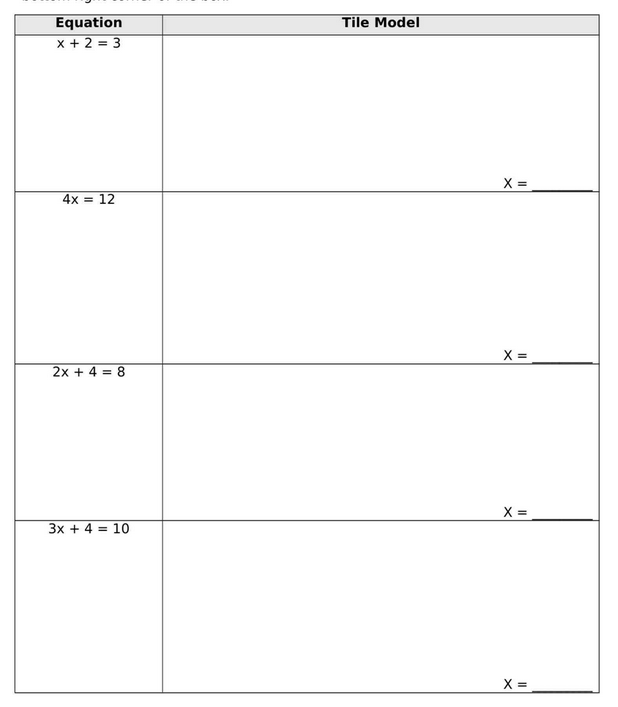 These are what I call the "rules":

1.  The goal is to end with the RECTANGULAR TILE(S) on one side and SQUARE TILES on the other.
2. EVERYTHING YOU BRING TO ONE SIDE, YOU MUST BRING TO THE OTHER SIDE.
3. You ELIMINATE BY MAKING ZERO PAIRS.

1. Represent the equation using tiles (in case it is not already in tile form).

2. Decide in which side (left or right) of the "equal" sign you will keep the variable (the rectangles).

3. Bring as many tiles as you need to make zero pairs and eliminate the SQUARES THAT ARE ON THE SIDE OF THE RECTANGLE.  In other words, you have to bring tiles to eliminate EVERYTHING that is not in its correct place.

4. BRING THE SAME AMOUNT AND TYPE OF TILES TO THE OTHER SIDE.
5. Now, take out all zero pairs.
6. MAKE SURE you have ONLY RECTANGLES in one side, and ONLY SQUARES on the other side.

IF YOU END UP WITH MORE THAN ONE RECTANGLE, DIVIDE THE SQUARE TILES EVENLY AMONG THEM.

Look at this example:
Here is another step-by-step example: