unit 8.3 - property of angles in circles

- Radius, diameter and chords: definitions and differences among them.
- Angles are named after the letters from which they originate.
- The letter in the middle of an angle's name is where the lines meet.  These lines originate at each of the other 2 letters.
- For example, angle AOB is at O, and this is the place where A and B meet (A and B meet at O).
- A straight line has an angle of 180 degrees. Think of the diameter... The diameter cuts the circle in half, thereby "cutting" the 360 degrees of the circle in half (180 degrees).

what we did in class

In this part of the unit, we will be dealing with the concepts of MAJOR and MINOR ARCS.  Take a look at the following definitions:

The concept of the MINOR ARC is important because, in this part of the unit, all angles we will be dealing with WILL ORIGINATE from the minor arc.  The word that you may see on your textbook, and perhaps on your P.A.T., is the word SUBTENDED, which means "TO ORIGINATE FROM".

MINOR ARC = The PARENTS (where the angles originate, or come, from)

Keeping the concept of the MINOR ARC in mind, let's us take a look at the different properties of angles in circles.  Before we do, however, we need to get comfortably acquainted with two definitions:

Definition of a Central ANgle

The angle formed by joining the endpoints of an arc to the centre of the circle is called a CENTRAL ANGLE.

As you can see, the "arms" of central angles are radiii (singular = radius).

definition of an inscribed angle

The angle formed by joining the endpoints of an arc to a point on the ACTUAL CIRCLE is called an INSCRIBED ANGLE.

This property says that in a circle, the measure of a CENTRAL ANGLE is TWICE the measure of AN INSCRIBED ONLY.  HOWEVER.... This is only possible WHEN AND IF THESE ANGLES ARE SUBTENDED (COME FROM) BY THE SAME MINOR ARC (that is, the central and the inscribed angle come from the same "parents" and therefore are "siblings". 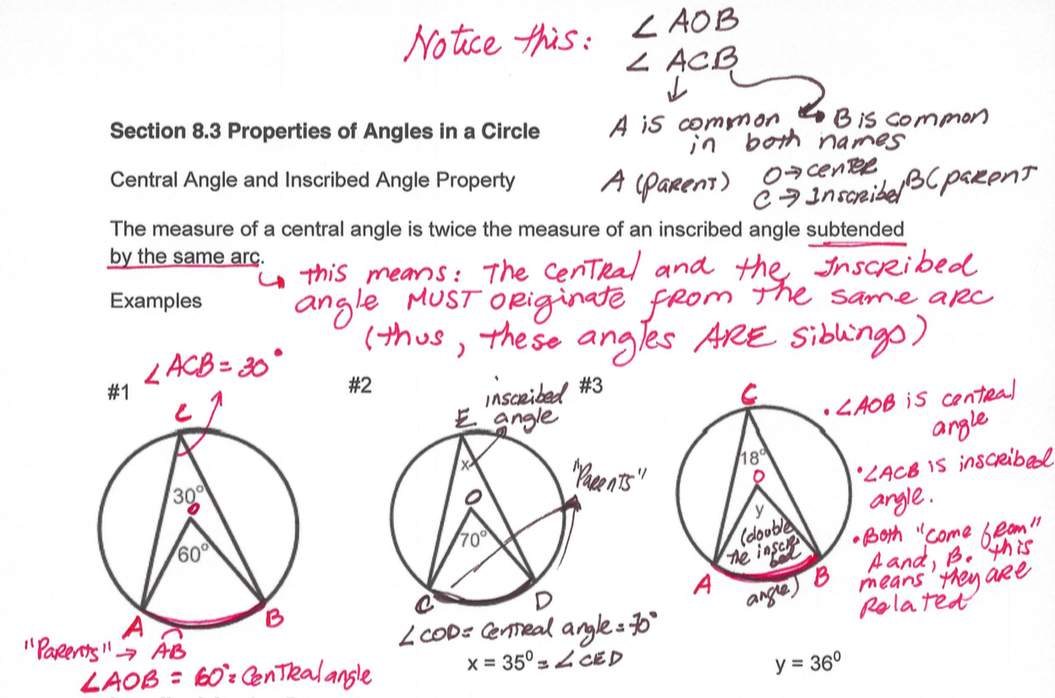 This property says that all INSCRIBED ANGLES subtended by (COMING FROM) the same minor arc ARE EQUAL. To be able to see if angles come from the same arc. always start at the inscribed angle and TRACE BACK to see where it comes from. 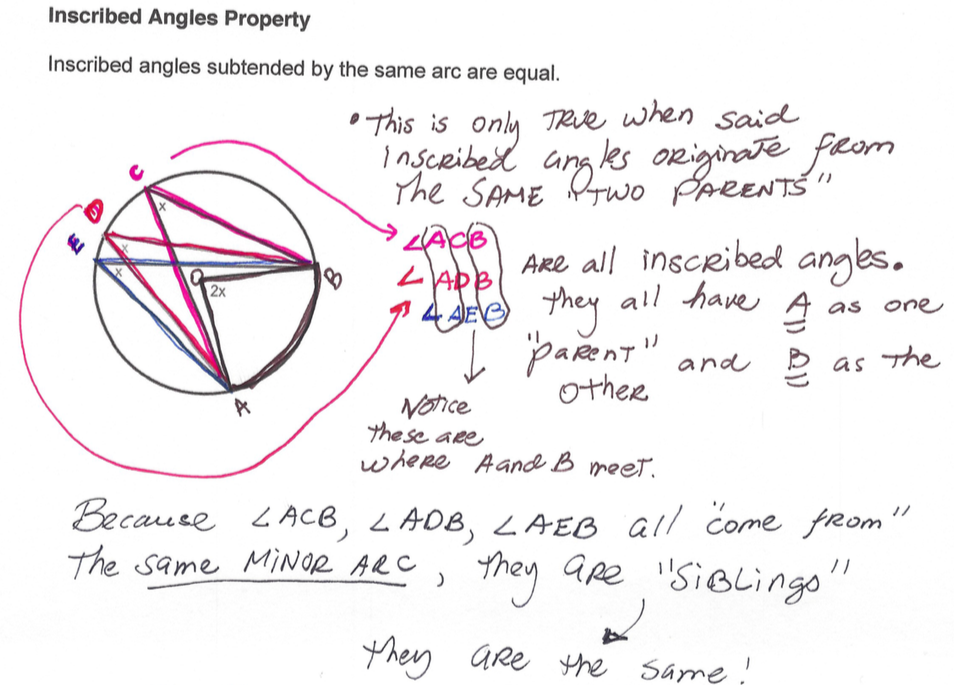 angles in a semicircle property

- A diameter, which goes through the center of the circle, cuts the circle into 2 SEMICIRCLES.  That is, the two arcs formed by the endpoints of a diameter are semicircles.
- This means that the central angle formed by the diameter is 180 degrees.  This also means that the INSCRIBED ANGLE originated at each end of the DIAMETER is always a RIGHT ANGLE (90 degrees). 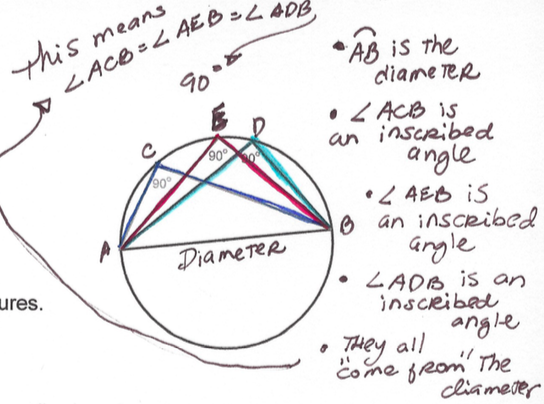 EXAMPLES OF ANGLES IN A semicircle property application